This post is aimed at engineers designing systems that need to process streams of events. One particular solution is explored, using an Azure Event Hub and the Capture feature.

There are a few concepts that are helpful to understand before diving in.

Getting started with Capture

A common approach to dealing with an “infinite” event stream is to break it down into time-based windows and process each window as a batch. Any message broker can handle this concept but typically you have to implement it yourself. I like to offload logic like that to the platform, which we can do if we’re using Event Hubs. The Event Hub service provides a feature called Capture that will process messages in a configurable window and write them in a batch to either Azure Data Lake Store or Azure Blob Storage.

For the rest of this post I’m assuming that your Event Hub has been configured to output to Blob Storage using a 5 minute/300 megabyte window. When Capture is configured, all messages inside a given Event Hub partition and time window will be written to one blob file compressed using the Avro format for efficiency. The naming convention for the blob is {AzureNamespaceName}/{EventHubName}/{PartitionId}/{DateDownToTheSecond}.avro. If no messages are received in a window, the Capture feature will write an empty Avro file to blob by default. I recommend turning this off to make processing of the blobs easier.

To handle the Capture output using a scalable platform is essential. For big data analysis, Azure Data Lake works well. However, it can be overkill for smaller datasets and lower throughput services. An option for the low-scale case is Azure Functions with a blob trigger like the one below:

The function will run every time a new blob appears in the blob container myblobcontainername. The ProcessWindowAsync method can then deserialize the input blob and process it. Microsoft provides the Microsoft.Avro.Core nuget package for working with Avro files as shown below. The code deserializes the input and logs each unique message body contained in the window:

For a production system, instead of logging, the messages in the window could be processed and analyzed. I hope this post helped you learn about Event Hub Capture and how it might be useful for processing event streams.

I’ve run into two problems with local development recently and I wanted to share the resolution to the problems in case it helps others.

The first problem was after a fresh clone using git in a bash prompt under Windows Subsystem Linux (WSL). When I started the full framework, asp.net application, the response was always a 404. IIS Express could not see content or application code in that directory no matter what I changed. The fix was to either re-clone using git in a regular windows command prompt, or copy all the files to another folder manually created in windows explorer. Something about the permissions of the parent folder don’t work well with IIS Express when created through the WSL git executable.

The second problem was with the web.config file not being recognized. I again had cloned the repository using git in a bash prompt under WSL. The file existed on disk but IIS Express was not reading it and applying the configuration. The fix for this problem was to rename the file in WSL bash to match the casing in the .csproj file.

For example, on disk the file was cloned as Web.config but the .csproj entry was:

Note the mismatch in the first character casing. Once I renamed the file to be all lowercased as the .csproj file expected, everything worked. I believe this issue has something to do with case sensitivity differences between WSL and Windows.

Recently Azure Functions runtime V2 was released and one of my team’s functions started to consume an abnormally high number of threads. When we dug into the details of the problem, the root cause was performing static initialization of logging on each function invocation. Specifically, we were using Serilog with the Application Insights sink and were recreating the sink each time the function ran. The sink was then assigned to a static variable (Log.Logger).

The issue is with the re-assignment of the Log.Logger static variable each time the function runs. Looking at a memory dump it was apparent that each thread (~400 of them) was waiting somewhere in Application Insights code. That led us to examine the application insights traces line, which is part of the Serilog initialization. A quick test confirmed that without that line, the threads stayed at normal levels.

As a general principle in Azure Functions, if a class can manage external connections and is threadsafe then it should be reused as a static variable. See the Azure Function documentation on static client reuse. Since Serilog’s Log.Logger is a static variable and is threadsafe, the code above should not have been recreating the logger on each invocation.

Instead, the code above should be refactored to reuse the Log.Logger variable. One pattern that makes this easy is using the Lazy class to ensure only one instance of the logger is ever created as shown below.

In the code above, the Application Insights Serilog sink is no longer reinitialized on each function invocation. The Lazy field handles initializing the logger if one isn’t already available. With this refactoring, the function consistently uses only ~40 threads. Additionally, the thread count is not impacted by additional load.

To help your azure function scale and to avoid consuming extra resources, reuse as much as possible between invocations.

When all else fails troubleshooting a production issue I often reach for Windbg to dig into a problem. For troubleshooting issues like high CPU or memory usage, Windbg is a great tool to pinpoint the problem. Windbg allows you to open a memory dump of a running application and inspect it. Anywhere you can run .NET code should support taking a memory dump, which you can then inspect using Windbg. I recently had to troubleshoot an issue with a .net core Azure Function application and while the steps were a little different than a web application, it is possible. Note - this post assumes you have Windbg installed. If not follow the link above and install it. I recommend the version you can get through the Windows store.

First, open the KUDU site for your problematic azure function that is running in Azure. The URL will look like https://<your-function-name-here>.scm.azurewebsites.net. Navigate to the Process Explorer tab and copy the PID for the process running your function. This might look weird because the process is running W3WP.exe but that is expected. There should only be two options and one will be tagged with the scm tag, meaning that is the process running the scm site. Choose the W3WP.exe process not tagged scm and copy the PID.

Next, open the Debug Console tab. I usually choose the CMD option but either should work. Navigate to the logfiles directory and make a new directory to hold the dump files. I typically use dumpfiles as the name. Navigate into the new directory and run the following command to generate the dump file - D:\devtools\sysinternals\procdump -accepteula -ma <your-PID-here>. That will generate the dump file and place it in the current directory. Finally, download the file with the .dmp extension that was generated to your local machine.

Open Windbg and load the .dmp into your debugging session. First, we have to determine if the application was running as x86 or x64 (this will be important later on). You should be able to find it in the output when the file was loaded. See the image below for an example (the example was running as x86). 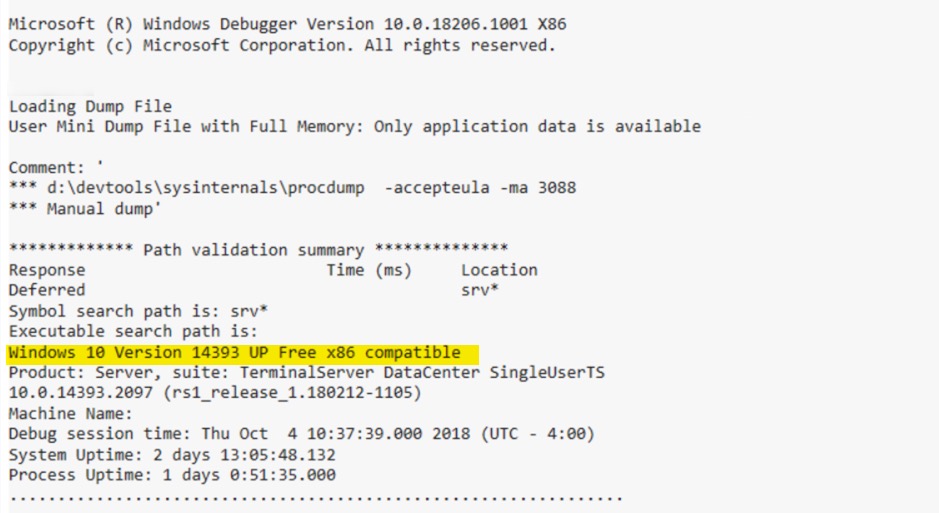 Now we are ready to inspect the memory dump. The next step is to load the appropriate SOS.dll (debug extensions for .net) for the .net runtime your application is running under. The easiest way to ensure you have the right version is to download it from the KUDU site. To find where it’s located run the following command in Windbg - .loadby sos clr for full framework applications or .loadby sos coreclr for .net core applications. That command attempts to load the sos.dll from the same location that clr.dll/coreclr.dll was located on the machine running the application. Since we aren’t on the KUDU site the command fails but it will output the path to the dll in the error as shown below.

Take the path from the error message and navigate to that location in the KUDU site for your application. Note that you have to press the System Drive button in the Debug Console to navigate to the root of the D:\ drive. Then you can move to the path specified in the error message. In my case it was D:\Program Files (x86)\dotnet\shared\Microsoft.NETCore.App\2.1.4. Once you are there, find the SOS.dll in that directory and download it. Finally, load that dll via the .load command - .load C:\the\downloaded\file\path\SOS.dll.

Another useful debug extension to consider using is MEX. Go to the MEX page and download the appropriate dll for your application. This is where the x86/x64 inspection we did earlier is useful. Once you have the right version downloaded, load it via .load C:\path\to\MEX.dll. You can see all the .net related commands by running !mex.help -cat 'DotNet' but I often find !mex.sqlcn useful for looking at open sql connections and !mex.us is helpful to automatically look at all stack traces of running threads and group similar stacks together.

Windbg commands are cryptic and difficult to remember so I have the best luck googling for my problem with “windbg” in the query to find blog posts that talk about how to debug my problem. Some especially useful articles I find myself going back to again and again are below. Good luck!

If you have been using WSFederation in a .net web application for more than a year or two, chances are that it is configured using the Microsoft.IdentityModel.Web or System.IdentityModel.Services libraries. Two HTTP modules are added to the application, WSFederationAuthenticationModule and SessionAuthenticationModule, to handle the WSFederation protocol and configuration was done by inheriting those classes or configuring on application start via the web.config. However, in newer versions of asp.net using “middleware” is preferred by using OWIN in both full framework applications and .net core. The purpose of OWIN is to abstract the underlying web server from the web application. HttpModules are tightly coupled to System.Web and therefore the IIS webserver. Using OWIN does require some configuration and setup changes which I will detail in this post.

Once OWIN is installed, we can begin configuring WSFederation. Previously a SessionAuthenticationModule would have been customized to set up properties for the cookies that will store session information:

and configured as a HTTP module in the web.config:

Now that we’ve converted the two WSFederation HttpModules we can finish configuring the OWIN pipeline by converting either the WSFederation configuration in the web.config or that was configured on application start. In my case, I preferred to set up WSFederation in code using the FederationConfigurationCreated event like the code below:

The items configured above can be added to the UseWsFederationAuthentication configuration:

Additionally, in the Global.asax.cs file if you wanted to have access to WSFederation events you could declare special methods on your HttpApplication class and those would be invoked while the WSFederation protocol was executing. Two examples that I’ve used are shown below:

Again, these items can be replicated in the UseWsFederationAuthentication configuration:

At this point, all old WSFederation code is replaced and WSFederation actions are handled using the OWIN pipeline. One thing to note - we are not able to re-use existing sessions so existing user sessions will be invalidated by this code change. Once the user logs in again at the STS they’ll be issued a new cookie that will work with the OWIN pipeline cookie authentication code.